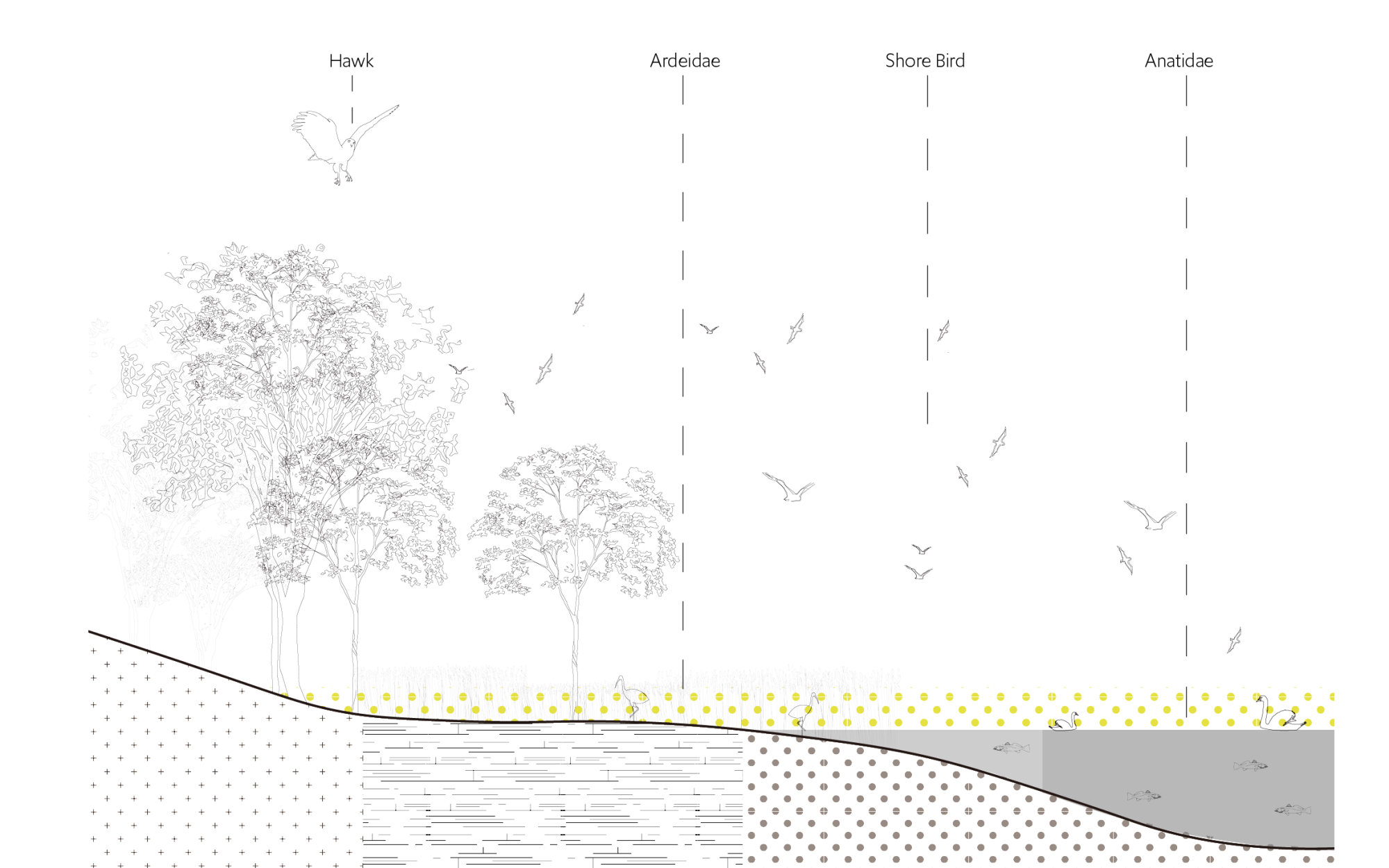 In Mediating Traces, students were challenged to design a basecamp within the Bombay Hook National Wildlife Refuge in Smyrna, Delaware. The wildlife refuge contains on of the largest tidal salt marsh ecosystems in the United States which serves as a large sequester of atmospheric carbon as well as a habitat for hundreds of species of migratory birds traveling along the Atlantic Flyway. Like many coastal habitats in the United States, Bombay Hook is threatened by erosion, rising sea levels, as well as polluted run-off. Therefore, students utilized a basecamp typology to create a spatial configuration that could preserve and restore the delicate coastal ecosystem of Bombay Hook. These basecamps would host members of the U.S. Fish and Wildlife Service as well as youth volunteers, utilizing a Live+Learn model, who would oversee the restoration of the threatened habitat.

Situated on a delicate coastal ecosystem in the Bombay Hook National Wildlife Refuge, this campsite hosts 25 volunteers who oversee the construction of living shorelines and tidal pools to protect and restore the eroding marshland. The site is specifically located within a large tidal marsh that completely floods and drains according to the tidal cycle. The camp, therefore, organizes itself around five large tidal pools which collect and retain sediment with the tides. Some paths are completely washed out during high tide to allow the tidal pools to refresh with sediment, altering the circulation around the campsite. Overtime, the tidal pools will build up enough sediment to where marsh grasses and other vegetation can be planted to restore the ecosystem for migratory birds and waterfowl. Raised dirt paths within the five main tidal pools allow for volunteers to tend to the vegetation as well as test different conditions in an individual quadrant. There is also a reservoir in the north east corner of the campsite which drains through a long channel that bisects the camp and ultimately passes through a small hydro-electric dam. This reservoir fills and drains with the tides providing a constant source of electricity for the campsite. Once the creation of living shorelines along the coast of the tidal flat is complete, some living quarters of the campsite will be removed and infilled with soil, leaving the pathways for future visitors to be able to observe the tidal pools without causing interference.

Located in the Bombay Hook National Wildlife Refuge, the base camp provides space for field biologists and students from nearby universities to explore the wetland and preserve the birds that live here. The camp is made by two parts, the main camp, and field research stations. One hosts the daily living and working and the other enables the researchers to carry their work into the refugee. Both parts are designed to be built on a grid system in which each element can be flexibly added and re-organized. The project tries to design a camp system that can expand and shrink according to the different needs and can be adapted to the diverse kinds of landscapes in the refuge. The project is presented as a manual, which aims to have the user engaged in the transforming of the architecture and provide instructions for a sustainable way of operating.