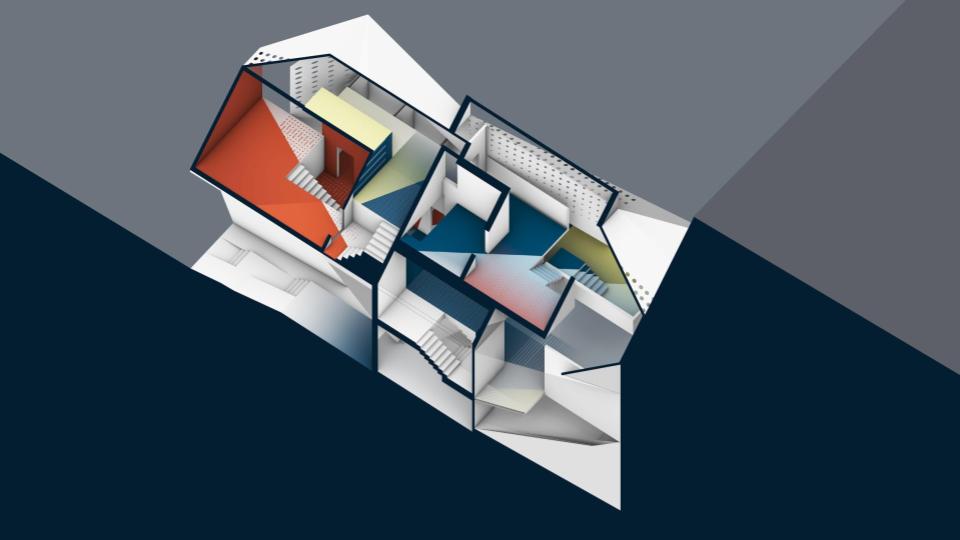 My project creates flexible occupancy scenarios through operable thresholds, which allows first-time homeowners to convert large portions of their homes into on-site rental units. The form of “Flexible Occupancy” was developed from a vertical core and an aggregation of rectangular volumes. The spaces of intersection within this massing informed the locations of the operable thresholds. These thresholds allow for multiple spatial configurations of the site, ranging from 20%-50%-80%-100% owner-occupation. The nature of this operability creates interesting programmatic changes: a living room one month becomes a space of circulation the next. This reconfigurability of space is emphasized through texture mapping. A pink-blue gradient sweeps down from the top floor, denoting ownership and continuity of space. Large planes of solid yellow throughout the interior index those portions of the site that are able to be partitioned off into rental units. In one instance, the fragmentation of blue against yellow visually extends ownership when the space is opened up. Conversely, in another instance a partition unfolds to reveal a swathe of yellow that connects to the previously fragmented yellow swatches on the purple-saturated floor. On the envelope of the building, the texture mapping plays with dimensionality by acting as a graphic on the facade that transitions into a material banding the balconies on the site. Additionally, when viewed from the exterior thin vertical apertures extend across the entire length of the facade ambiguating the number of occupants within the site.

My project consists of micro units loosely packed inside a structural shell carved with geometric voids that are experienced spatially and graphically through vertical circulation. The residential building is for low income people. All unit sizes are under 400 sqft but maximized the residential facilities to live in better condition. Colors and geomatric shapes will lead people in to each common space and residential units. Depends on where and when, the building’s appearance will change dynamically.